I have been mad at Napoleon for turning his back on his friends since I interacted with him on the farm.

I celebrated when he and all his friends defeated Mr. Jones. They had the same cause, their laws were impeccable, and you should have seen their seven-point programme. I sang along when they sang “Beasts of England”, God, I was in love with old Major, his passion and charisma was to reckon, I cried when he died. But was comforted by the fact that his efforts were not in vain because Mr. Jones was defeated a few days later. Behold it is a new day.

To create a fundamental change, there was broad based approach – they acknowledged that education was key- these guys had to be taught how to read and write. Napoleon’s special interest group was the young puppies that he taught the Principals of Animalism.

The thing is, since Mr. Jones was managing the affairs of this farm, it was incumbent upon the liberators to work hard and determine the future of this farm lest it faces chaos.

Snowball is all for the windmill, he passionately relays the concern for them to have electricity on the farm- he probably knew that winter is ahead and that they would need the electricity to keep themselves warm come wintertime.

Napoleon vehemently rejects this plan; and I am thinking what is this guy’s problem. Then I realize, he is beginning to get high on power crack- a thing that cannot allow him to think about the future of the farm.

Snowball is declared an enemy of the people and consequently, Napoleon unleashes his former students- the puppies that were now grown up men on snowball chasing him off the farm and later is publically executed with his allies in front of all the animals so that they can learn their lessons first hand.

You see that is the problem with crack is that destabilizes emotions and creates paranoia however, if you have politically correct friends like Boxer that declare things like “Napoleon is always right” then you can survive another day.

Days passed by, the state of affairs on the farm deteriorated,  rule of law is gone, the systems have failed, there is inequality, the pigs were the only ones allowed to sleep in beds, drink alcohol, walk on two legs and wear clothes- Sadly, they had become like the human beings  they had defeated.

But then, as I grow older, I have realized my need to repent of my unforgiving heart since it seems all revolutions somehow end up like that. 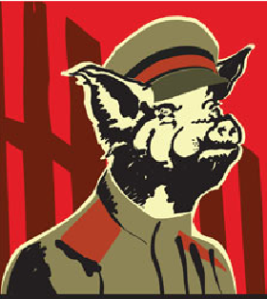 One thought on “Coming Clean: Forgive me Napoleon”